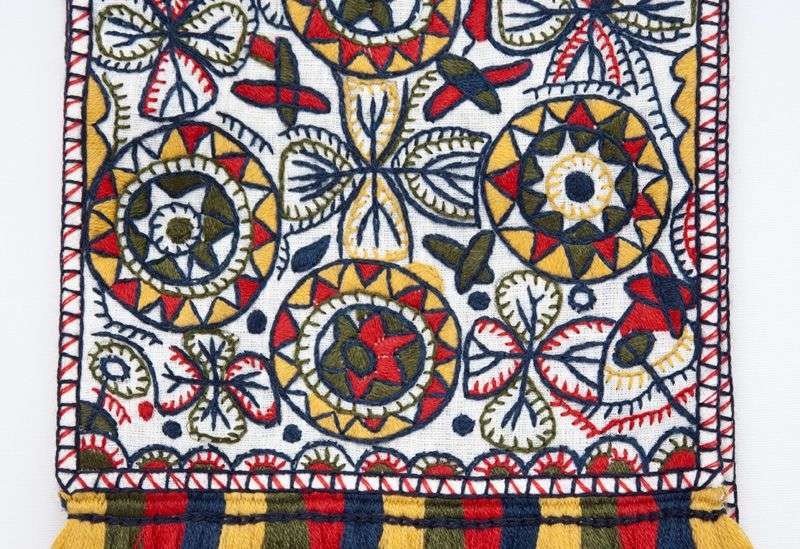 You are invited by the Sydney Estonian Society Art, Handicrafts and Ethnographic Collective for a day workshop in various embroidery techniques including archaic Mulgi embroidery and cross stitching.

Open to both novice and advanced stitchers, all are welcome. Whether you wish to learn, share your skills or just join us for a chat, the event will also include material costs, lunch and afternoon tea.

Mulgi embroidery is a very old style of embroidery that gives a lots of opportunities for usage nowadays. As a distinct regional style found across South Estonia, particularly around Viljandi, there are also shared similarities with embroidered costumes from the island of Kihnu.

Historically, these motifs – stylised images from plants and flowers – have been used widely: on medieval church walls, windows and on textiles. Mulgi women had several pieces of clothing decorated with this beautiful embroidery: headgears, aprons and big scarves traditionally on linen, with yarn coloured (painted) with home-derived vegetable dyes, mostly in yellow, red, blue and green.

Traditionally motif edges were done with dark blue yarn. From stitches were used stem-, button hole-, chain-, cross- and satin stitch. The motifs used in archaic embroidery are known almost anywhere in the world. Like all the arts of the Middle Ages, the motifs were filled with meaningful symbols including:
Information was sourced from here (Estonian text available only): https://www.mulgimaa.ee/mulgi-keel-ja-meel/rahvaroivad/arhailine-mulgi-muster/
+ Google Calendar+ iCal Export